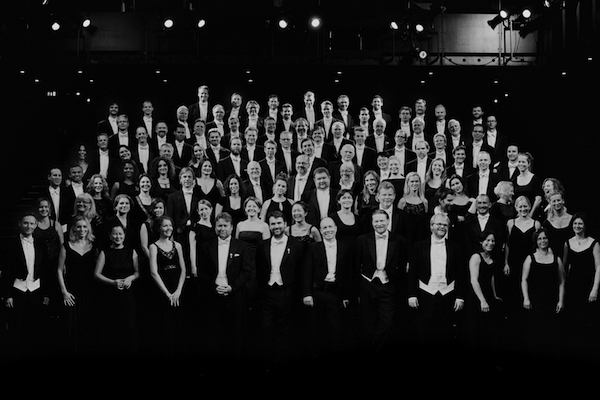 The Royal Danish Orchestra is the oldest orchestra in the world and one of the most distinguished. Its first musicians were recruited in 1448 and there have been over 1000 members of the ensemble since. It has been led and conducted by some of the greatest names in musical history.

Since its foundation, each member of the Royal Danish Orchestra has been assigned a number. Famous former members include John Dowland (No 140), Heinrich Schütz (No 259), Niels Gade (No 561), Johan Svendsen (No 640) and Carl Nielsen (No 657). Nielsen played in the orchestra’s second violin section before becoming a resident conductor. Many of the celebrated composer’s orchestral works were performed for the first time by the orchestra, often with Nielsen himself on the podium.

The Royal Danish Orchestra is famed for its vintage sound, and particularly for its string timbre. It enjoys privileged access to an exclusive collection of stringed instruments by great Italian masters including Nicolo Amati, Andrea Guarneri and Antonio Stradivari.

Today, the Royal Danish Orchestra resides at the Royal Danish Theatre, performing for opera and ballet productions as well as concerts. The ensemble’s main residence is the spectacular Copenhagen Opera House, designed by Henning Larsen and opened in 2005 as a gift from Mærsk Mc-Kinney Møller to the people of Denmark. Since then the Opera House has also been home to the Royal Danish Orchestra’s symphonic concert series, which was established by former music director Johan Svendsen in 1883. Members of the orchestra also give chamber concerts in the Opera House’s magnificent foyer and second stage, Takkelloftet.

In the 20th century, the Royal Danish Orchestra began touring internationally. Recently, it has played at the Musikverein in Vienna, the Lincoln Center in New York, and at the Philharmonie in Berlin. It appears on the award-winning DVD recording of Wagner’s Ring from Copenhagen, and on numerous other DVD and CD productions besides. In the second decade of the 21st century, the orchestra began to participate in live cinema relays of opera and ballet productions to audiences far and wide.

The Royal Danish Orchestra is not only a living embodiment of Denmark’s illustrious musical history; it is also a priceless resource for Danes young and old, near and far. The orchestra’s series of workshops invite schoolchildren into the Opera House to explore the rehearsal and performance process while also benefitting from personal introductions and tutoring on instruments from the ensemble’s renowned musicians.

The Friends of Det Kongelige Kapel was established recently to strengthen the bonds between the orchestra and its loyal followers. To join the Friends association, click here.

Anton Bloch’s Chronological Register of all the members of the Royal Danish Orchestra is currently maintained by Troels Svendsen. Click here to view the complete list.

The chronology of The Royal Danish Orchestra

1556: In 1556, King Christian III engages Adrian Petit Coclicus as a “singer and musician” for his orchestra. Coclicus means “rooster”, and the man is notorious for chasing ‘hens’ – so much so that he ends up being guilty of bigamy, despite his having been bishop and confessor to the Pope himself. King Christian III hires Coclicus under the stipulation that he “live honourably and in a Christian manner, if he does not wish to be dismissed and lose his salary” – the salary consisted of 40 Joachimsthalers, 3 pounds of malt, 3 pounds of rye, 1 ox, 4 sheep, 4 mast-fed pigs, ½ a keg of butter and free lodging.

1588: King Christian IV is crowned, and court music enters its heyday. The Royal Danish Orchestra now consists of 16 trumpeters, 30 singers and 31 instrumentalists. The famous English composer and lute player John Dowland is engaged as conductor for the orchestra. He spends a total of 8 years in Copenhagen and receives a salary equivalent of an admiral.

1607: On 12 September 1607, court trumpeter Christen Laursen “unfortunately murdered” his fellow musician Frederick Mott. The murderer was later executed at Kronborg Castle. These were harsh times – another trumpeter who had been sentenced to life in prison was promised leniency on the following conditions: he was to climb up to the weathervane atop the Nikolaj Church tower, play his trumpet and drink numerous glasses of wine in toasts to the king’s health. He was then to throw the empty glasses down into the churchyard, and because they landed without breaking, it was interpreted as a good omen both for the king and for the church, and the court trumpeter was duly pardoned.

1655: In 1655 the violin makes its grand entrance into court music – previously, the featured instruments had included Renaissance instruments such as the zinc, the crumhorn, the clarinet and trumpet, trombone, flute, lute, and viola da gamba. But King Frederik III’s wife, Sophie Amalie, was an admirer of the Court of the Sun King at Versailles, and wished to emulate it by establishing her “violin orchestra” inspired by Louis XIV’s “Grande Bande” and “Petite Bande”. Thus comes into being the title “court violin”, the forerunner of the current “royal orchestra musician” designation (today’s title for members of the Royal Danish Orchestra).

1659: During the Dano-Swedish wars, the members of the violin orchestra, like other courtiers, are stationed on the frontlines at Løngangen and the Royal Arsenal when Swedish King Carl X invaded Copenhagen in 1659. There were no losses among Frederik III’s musicians.

1703: The Royal Danish Orchestra added woodwind instruments, and now played Tafelmusik, cantatas, and entr’acte music for French comedies, as well as dance music for masked balls and other festive events. But the Danish court also wanted opera, and in October 1703 the royal musicians, now numbering about 15 members, take up residence in a brand-new opera house located at Fredericiagade and Bredgade. The opera house was intended to serve as a public theatre with a royal box for the founder himself, Frederik IV. But the opera house is in use for just five years due to lack of public support. For the following 10 years it stood empty – only to be used as a corn warehouse, armoury, cadet school, barracks, a house of parliament, an infirmary and the Maritime and Commercial court. Today, the former opera house is home to the Eastern High Court.

1791: In 1788, double bass player Gotfred Schreiber died, leaving a wife and eight children. Conductor J.A.P. Schulz arranged a charity concert for the widow and children, but as the other orchestra members were not much better off than the Schreibers, Schulz decided to establish a widow’s pension fund for the orchestra. The idea is reported to have been received with “joyous thanks”. The orchestra performed two concerts each year to benefit the pension fund, and contributed 50 rix-dollars to the fund when the orchestra gave performances outside the royal purview. The first widow’s pension fund concert took place in December 1791.

1810: “Mozart’s works receive no better performance than by this capital’s orchestra”. The orchestra in question is the Royal Danish Orchestra, and the statement issues from Mozart’s own widow, Constanze Mozart, a frequent visitor to the Royal Danish Theatre. She had married Councillor of State Georg Nikolaus Nissen and lived in Copenhagen. She wished that Mozart had lived to witness the masterful performance of his Don Giovanni by the Royal Danish Orchestra, and that he had had the chance to experience the joys that he never could in Germany.

1828: In 1828, the Royal Danish Orchestra voted on a new uniform, which was to be worn at the upcoming premiere of Elverhøj. Clarinettist Jens Krag voted against; his pupil Theodor Hornbeck had sworn to do likewise, but changed his mind. Jens Krag was so incensed that he gave Theodor Hornbeck a beating, which was a big mistake. Krag had to submit to a disciplinary investigation and ended up as the first musician to be sent to the Blue Tower – but not the one at Copenhagen Castle in which Leonora Christina had been imprisoned. This Blue Tower was located at Langebro and served as the gaol for courtiers and civil servants, a category to which the Royal Danish Orchestra belonged. Much to Theodor Hornbeck’s chagrin, the new uniform was soon discarded.

1849: After more than 400 years in the King’s service, the Royal Danish Orchestra was transferred to state authority, and that means hard times for the orchestra members. Many of them are threatened with pauper’s prison, while Mozart Petersen (see photo and caricature at right) ends up spending time in gaol.

1851: In 1851, the parliament set up a commission to abolish the Royal Danish Orchestra, with a music manager merely hiring musicians on a performance basis. This crisis was averted by theatre manager Johan Ludvig Heiberg with the statement: “The majesty of art resides in its aristocracy… The prestige of the Royal Danish Orchestra cannot of course be destroyed, nor can its high standing be lost, but its prestige is certain to be damaged if the avenue of royal engagement is closed off.”

1874: The Danes were mad about Mozart – so much so that a brother and sister named Mozart and Mozartine (surname Pedersen) were often seen in the streets of Copenhagen. Mozart Petersen is engaged as a clarinettist in the Royal Danish Orchestra at the age of 15, becoming colleagues with his father, a rabid admirer of Wolfgang Amadeus Mozart. At Mozart Pedersen’s favourite tavern in Nyhavn, Hos Foght, many rum toddies were consumed after performances. One February evening in 1874, Mozart Pedersen had a little trouble finding his way home, fell into Nyhavn Canal, and drowned.

1876: The image shown above depicts Royal Danish Orchestra musician and cellist Fritz Albert Christian Rüdinger, famed as the orchestra’s caricaturist. The drawing shows the musicians in relaxed pose in the pit during a performance of Auber’s opera La muette de Portici. The picture once hung at the previous Royal Danish Theatre, which at the time was over 100 years old. A few years later, in 1876, the building we know today as the Old Stage came into use.

1924: There was one female member of the Royal Danish Orchestra in 1924 – see photo at right. Today, about half of the orchestra is composed of women.

1955: The Royal Danish Orchestra expanded over the next decade from approx. 70 members to include over 100 musicians.

Bernstein and the Kapel

Book about The Royal Danish Orchestra